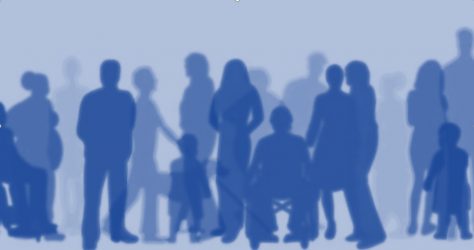 We hear daily about the influx of accessibility lawsuits springing up over the past few years. Industry leaders like Lyft, Beyonce.com, the IRS, CVS pharmacy, Macy’s, and Domino’s Pizza, have been sued for accessibility issues such as inaccessible vehicles, inaccessible physical locations, or inaccessible websites. It’s easy to just write off plaintiffs as the “bad guys” trying to make easy money when in reality they are real human beings who are being prevented from living their lives and being part of society by very real barriers. The end goal of accessibility is for a real, live human being who happens to have a disability to access the information, products, or services as easily as any other customer. It’s not about lawsuits, checklists, compliance, or even the ADA; accessibility is about people.

Albert Rizzi is blind and was unable to manage his retirement funds through Morgan Stanley because the money management resources he needed to use, including websites, apps, PDFs, and software, were not formatted to be accessible by the screenreader he uses. Albert, once the head of a Kindergarten center, lost his sight after an acute case of fungal meningitis in 2006, and since then has been an advocate for accessibility. He started his own business called My Blindspot, which helps companies identify their own accessibility “blind spots” and fix them. When he realized that Morgan Stanley digital resources were inaccessible, he even offered the services of his company free of charge to fix the issues. Albert received no response from Morgan Stanley.

Eventually, his frustration with the discrimination took the form of a $9 million lawsuit, which settled out of court in 2018. Without the use of his assistive technology, he has no choice but to ask a sighted person to read the information to him, which puts him and his sensitive personal information in a vulnerable position. His concerns are not without merit- he recently had his personal financial information compromised. It would be unconscionable to expect any investor to leave his or her money in in the hands of an investment banker without any means of tracking its growth, but that’s exactly what happens when the finance industry fails to provide statements, websites, and apps that are accessible for blind customers.

Aleeha Dudley was a student at Miami University of Ohio and is blind. Prior to beginning her freshman year at Miami University, she met with the Office of Disability Resources (ODR) to discuss her needs and ensure that she would receive Braille textbooks and course materials in a format that was compatible with her Braille reader, her primary reading method. But when the school year started, a letter was sent to Aleeha’s professors stating that they needed to provide materials in rich text format (RTF), instead of the agreed-upon Braille format.

Aleeha had to purchase regular versions of the textbooks, which the Office of Disability Resources scanned into RTF and partially remediated. The textbooks were not remediated correctly or prepared with correct structural data, so the scanned versions of the textbooks were nearly incomprehensible to her. No tactile graphics were made available to her, so she did not have access to needed images. All learning management systems (LMS) were inaccessible, so Aleeha was often unable to access or turn in assignments. While she was provided an assistant, he had never worked with a student who was blind before, and the ODR provided him no resources, guidance, or training to assist Aleeha. Repeatedly, she was prohibited by professors from participating in lab experiments.

Aleeha was unable to complete her coursework at Miami University and was forced to transfer to The Ohio State University instead. Miami agreed to pay for Aleeha’s tuition, room, and board, but she still faces the inconvenience of changing schools and learning a new environment.  Aleeha hopes to pursue her dream of a degree in zoology followed by veterinary school. When schools like Miami University are unwilling to accommodate an otherwise capable student in his or her choice of academic and professional career, they stunt that student’s educational and professional opportunities. Aleeha’s lawsuit seeks to allow her to pursue her dreams like any other student and deter inaccessibility to future students.

Sassy Outwater-Wright is a blind woman in Boston who has faced rideshare discrimination repeatedly. On a cold New England evening, she called a rideshare for herself and her guide dog, but when the ride pulled up, the driver was reluctant to allow the guide dog into the vehicle. In the past, she had experienced her rideshare drivers driving right past her to avoid having to allow an animal into their cars.

Sassy could have let the driver leave without her, as he wanted to do, and call the company to report the ADA violation. The driver would have lost his job, because it is illegal to forbid guide dogs from accompanying their handlers and it is company policy for most rideshares to dismiss any drivers who refuse them. However, Sassy chose to explain to the driver that her dog was her partner and was very well behaved. She explained that she needed the dog and his services and that he would not harm the driver, who had had a negative experience with a dog attack in the past. This time, her patience paid off. The driver agreed to drive her home and learned about service dogs and their importance. Rideshare companies have made strides in the accessibility of their apps, but they still have some work to do educating their drivers about service animals and the people who travel with them.

Since a 2018 lawsuit, Amazon has made great strides to become accessible to all users. Customer Tim Harshbarger is visually impaired and was particularly impressed when he was easily able to purchase a tee-shirt for his niece on the site. Amazon uses headers and landmarks so that assistive technology users can skip around to different relevant sections of the page without having to listen to each and every word in each section. Many sites fail to make the checkout process navigable by not tagging buttons like “Buy Now” or “Add to Cart,” or not clearly labeling form fields where billing and delivery information should go. Tim has run into that problem many times, and his frustration leads him to leave those websites and shop elsewhere.

However, now that Amazon has an accessible website, the process of finding the tee-shirt he was looking for (the “search” box was clearly labeled), choosing the right color, adding the item to his cart, and checking out was simple. Considering the fact that people with disabilities and their families possess nearly $6.9 billion in combined spending power, Amazon is doing what’s best both for their customers and for their business. Online retail makes shopping significantly easier and more convenient for everyone, especially those with disabilities, and accessible eCommerce websites give everyone the opportunity to shop without frustration.

Shelbi Hindel is a blind voter in Ohio.  Disability Rights Ohio filed a lawsuit on her behalf against Ohio’s Secretary of State, Jon Husted. Shelbi was unable to vote independently because Ohio only offers ballots in visual formats, be it electronically or paper.  Absentee ballots are only available in paper form, and Shelbi would have to ask someone to read her the ballot and fill in the appropriate boxes for her. The option for Shelbi to vote independently and privately with an absentee ballot is simply unavailable. The Ohio Secretary of State argued that it would “fundamentally alter Ohio’s voting program,” yet military members and civilians living overseas are already permitted to vote via email. Other states, such as Maryland, provide accessible, online ballot-marking tools that could easily be shared with Ohio. In a time where voting is legally available to any US citizen, that means that every voting option needs to be available to every voter, especially when more accessible options already exist.

The National Federation of the Blind (NFB) and plaintiffs Juan Figueroa, Derek Manners, and Martti Mallinen filed a lawsuit against Medicare and Medicaid because the public services failed to provide information in formats that were compatible with assistive technology. Medicare and Medicaid sent policy notices and documents to customers as physical documents, which Juan, Derek, and Martti were unable to read due to their blindness. Since no other format was provided – a phone call, email, etc.- they had no way of knowing that some services they received had been denied coverage but were available for appeal. Juan, Derek, and Martti, along with other NFB members, were at risk of losing their benefits or experiencing a disruption in their coverage because they could not access these policy notices.

Because of this lack of accessible information, they may have been unable to complete the appeals process, potentially amounting to significantly larger medical bills. People with disabilities are more likely to have additional healthcare concerns, and make up a significant amount of healthcare spending in America because of it. By not providing accessible forms of communication, people who are insured can miss out on valuable or even life-saving information.

While standards, regulations, and compliance standards are vital to ensuring that organizations are held accountable for being accessible to all visitors, it’s more important to remember the purpose of these rules- protecting real people. As much as 20% of the population experience disabilities, and when organizations fail to consider this 20%, they are discriminating against one of every five people who want to do business with them, making the lives of real people more difficult, complicated, and expensive than they need to be. Things we all do every day become frustrating to impossible for people with disabilities when accessibility is not considered.  These frustrations can also spill onto their friends and family as well. Accessibility is about real people, doing real life, day to day activities. Be sure you include everyone.

For more information about how your business or organization can be more inclusive and reach everyone, visit our Accessibility Resource Library.