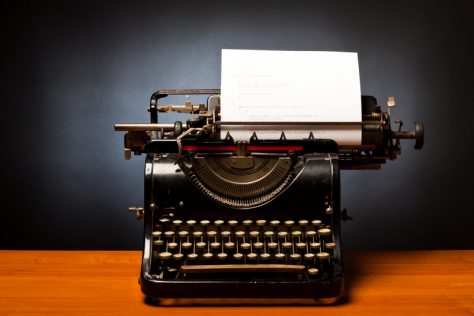 The last time you bought groceries, you probably didn’t just push your cart over the edge of a 4 inch curb between the store and parking lot, hoping your eggs didn’t shatter into a gooey mess. You looked for the curb cut instead. When you watched a funny cat video on YouTube in the office, you probably didn’t let the volume blare to catch your boss’s attention. You discretely used captioning.  Maybe instead of heading downstairs to retrieve your phone to look up the weather before getting dressed, you just asked Alexa. Inventions created to help people with disabilities navigate daily life and communicate more effectively often become accessibility solutions everyone can use.

Without the keyboard, we wouldn’t have computers, tablets, or smartphones. This key invention starts with a love story. Pellegrino Turri was a notable mechanic who was in love with Countess Carolina Fantoni de Fivizzano. As was customary in the early 1800s, the two regularly exchanged letters. The Countess’s eyesight slowly deteriorated to the point where her writing was illegible. To help the Countess continue writing to him and her friends without the help of others, Turri created a solution.

Writing without a pen

He built a device with raised letters attached to metal arms that used carbon paper to imprint letters when struck. He also invented the carbon paper to use in the machine. The machine did not become popular until the late 1800s when it was mass-produced by sewing machine manufacturer E. Remington and Sons. Later, an electric version caught on in the 1920s providing quick, professional accessibility solutions.

It’s no secret that Alexander Graham Bell invented the telephone. What might not be as commonly known is that he discovered the technology by researching acoustics because of his mother’s progressive deafness. Bell’s father was a professor of speech elocution and his mother was a deaf pianist. When his family moved from Scotland to America, Bell opened the School of Vocal Physiology and Mechanics of Speech with his father’s help.  The School taught deaf people to speak, a groundbreaking concept at the time. His father invented a system to visually represent speech sounds which he used to teach the students. He went on to marry one of his students,  Mabe Hubbard, who was also deaf.

Being surrounded by those who could not experience sound, Bell began studying sound and sound creation searching for accessibility solutions. Starting with the technology used for telegraphs, he began working to transmit multiple messages at once. He then considered transmitting the human voice across the wires instead. He and his partner, Thomas Watson, created a receiver that turned electricity into sound, and they patented the first telephone in 1876. A year later he founded the Bell Telephone Company, which still exists today as AT&T. Just ten years after it was patented, over 150,000 Americans owned phones.

While Bell’s landline telephone is quickly moving towards extinction, modern cable and internet still use those lines for transmission. The phone has morphed into the cell phone we use today.

Edmund Burke Huey was interested in finding out how people read.  He researched and wrote about the intersection of psychology and pedagogy of literacy. In the interest of learning more about the physiology of the eye-brain connection, Huey developed a rudimentary, invasive device to determine how and where a reader’s eye traveled on a page. He fitted the participant’s eyeball with a plaster mold attached to a narrow metal tube. When the reader’s eye paused, the tube displaced soot on the page.

Learning how the eye travels

Prior researchers had assumed that the eye traveled over the page in a smooth, even motion Huey’s research revealed instead that the eye could not actually read words while in motion and that reading involved a series of short, quick movements and pauses. This information would help those who had difficulty learning to read due to learning disabilities and other conditions and led to the invention of accessibility solutions.

Huey’s breakthrough studies led the way for future eye-tracking devices. They now use cameras to track a reader’s eye movement across the page. The further development of this technology has led to software that allows people who are paralyzed or otherwise unable to use their hands to use their eyes instead to navigate through emails, social media, or websites.

Marketing research uses this same technology to help marketers determine where readers’ eyes linger on the page. Eye-tracking research helps identify the best location on a web page to place important information. So the next time a web page element catches your eye, you just might have Edmund Burke Huey to thank.

We see curb cuts just about every time we leave our homes. They started as solutions to make a college campus more accessible to disabled World War II veterans.  Now curb cuts are helpful for getting a grocery cart from the store to your car, crossing the street with a baby stroller, or just getting around for those with knee problems. Jack Fisher, a disabled veteran and lawyer from Kalamazoo, Michigan, was an early advocate who petitioned the city to add curb cuts so people in wheelchairs could navigate the city.

Challenged by sight and mobility

Fisher faced discrimination early because of an eye injury sustained during his birth. He received special dispensation to be able to enlist in the army during World War II.  However, a jeep accident badly injured him in 1943 and cost him much of his mobility, leaving his whole torso in a metal brace and giving him a severe limp when he walked.

Fisher had a very difficult time finding employment because many companies assumed he would be unable to do his job due to his disability. He struggled with his sense of self-worth because he knew he could never enjoy many activities and jobs again. Eventually, the Disabled American Veterans (DAV) hired him. His job was to help process claims submitted by disabled veterans to receive medical treatment, financial compensation, rehabilitation, and supplies.

After processing hundreds of claims to help other injured veterans like himself, he found a renewed sense of purpose and returned to Harvard to complete the law degree he had started before the war began. Upon graduation, Harvard helped secure Fisher a job offer at a law firm in Detroit owned by other Harvard grads.  He turned down the offer, preferring instead to start his own practice in Kalamazoo. His practice focused on helping other disabled veterans, many of whom he had worked with at the DAV.

Advocating for easier navigation through the streets

Many of his clients had a difficult time getting to his downtown Kalamazoo office because of the city’s tall curbs. Fisher took it upon himself to petition the Kalamazoo City Commission to add curb cuts to downtown sidewalks. The city manager was particularly sympathetic to his cause because his adult son also used a wheelchair for mobility. Kalamazoo soon installed Ramps and handrails at several intersections in the downtown area. When the DAV monitored and reported on their popularity among disabled people, older people with limited mobility, and mothers with baby carriages, they added many more throughout the downtown area. Kalamazoo became the first city in the country to implement the ramps as accessibility solutions.

Raymond Kurzweil is an inventor from an early age.  At the age of 14, he showed great interest and talent for computer science and began working at Head Start as a computer programmer. At 17 Kurzweil won an international science fair by developing a computer program to create music mimicking the style of great composers. This computer program sparked his ongoing attempt to create order and identify patterns in complex data.  He used these ideas to develop programs that could synthesize sound. Kurzweil attended MIT and founded Kurzweil Computer Products in 1974.  His company invented the flat-bed scanner, a text-to-speech synthesizer, and the first optical character recognition (OCR) software.

Using technology to meet the needs of people who are blind

Kurzweil decided to put all three of those inventions together to develop a reading machine for the blind and visually impaired after sitting next to a blind man on a plane. The man turned out to be the future president of the National Federation of the Blind, Dr. Marc Maurer. He told Kurzweil that one of the biggest barriers people who are blind face was being able to read print was. One of Kurzweil’s first customers for his reading machine was Stevie Wonder, who later inspired him to invent the first realistic-sounding music synthesizing keyboard. The text-to-speech synthesizer technology later became the technology behind screen readers for those with visual disabilities and also voice-activated assistants like Siri, Alexa, and Google Home, as well as the KNFB Reader, a mobile and computer app that reads scanned images of print aloud.

Mobility and communication barriers can impact people with permanent disabilities. These barriers also affect people experiencing temporary disabilities, which almost everyone faces at some point in their lives. Accessibility solutions designed for people who face similar barriers on a daily basis benefit everyone. By developing innovative ways to remove barriers to mobility and communication, often we find ways to improve everyone’s lives.

Need accessibility solutions for your digital resources? Contact us!